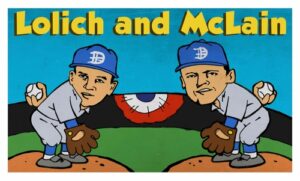 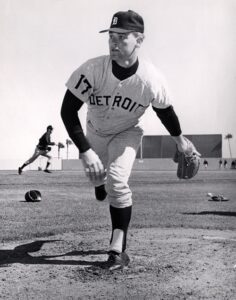 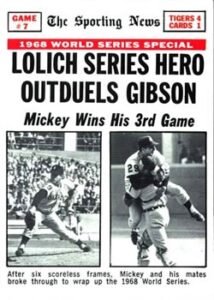 Even in their best season together, the differences between Denny McLain and Mickey Lolich bordered on the extreme.

In 1968, McLain was all glitz and glamour, flying his own airplane around the country and telling reporters how his biggest aspiration wasn’t necessarily to win the Cy Young but to appear on The Tonight Show. Lolich regularly drove 250 miles north to Alpena, Michigan, where his National Guard unit was based—the same one that had patrolled the riot-torn streets of Detroit the summer before.

Looking back on that memorable season and this star-crossed partnership, McLain could have been the big brother, the one who always got his way, while Lolich was the little kid at his heels, struggling to keep up. Amazingly, the Tigers rode this dysfunctional relationship all the way to the World Series.

When the ’68 season began, the Tigers were one of the favorites in the American League. The year before, Detroit had finished one game behind the Boston Red Sox as the Tigers, Twins, and White Sox were in contention down the stretch. That the Tigers found a way to battle to the end was remarkable seeing that the city of Detroit endured the worst riots in a US city since the Civil War, with 43 dead and more than 2,000 buildings burned.

“The city fathers, the police, they were all rooting for us when the ’68 season began,” recalled Jon Warden, who was a rookie pitcher with the Tigers that year. “They said, ‘Maybe if you guys can win, you can keep the city from burning again.’”

While McLain arrived at the Tigers’ spring training home in Lakeland, Florida, sporting orange-tinted hair (“I’ve been out in the sun a lot,” he told reporters), he got off to the kind of start that everyone in Motown was hoping for. By the end of June, Detroit’s youngest 20-game winner since Schoolboy Rowe in 1934 had a 14–2 record. Some were beginning to wonder if he could be the first pitcher in the big leagues to win 30 games since Dizzy Dean accomplished the feat 34 years earlier.

Unlike many athletes, McLain loved being in the limelight. “I wanted the attention of the writers so badly that I’d get depressed between starts because they weren’t in front of my locker,” he wrote in his memoir I Told You I Wasn’t Perfect. “I wanted to talk about anything and everything in grand fashion and be the center of attention. I’ve been in situations where a writer’s pen ran out of ink and I’ve given him one out of my pocket.”

If McLain was the kind of guy who could suck the oxygen out of a room, Mickey Lolich was much more comfortable hanging in the background. It didn’t help that Lolich struggled for much of the ’68 regular season. Through July, the left-hander’s record was 7–7, with a save, as he bounced between the rotation and bullpen, missing time due to his National Guard obligations.

Despite such lackluster results, the Tigers knew that Lolich was crucial to their season. “Denny McLain was Denny McLain. Larger than life and well-spoken,” Dick McAuliffe said decades later. “But we knew Mickey was as important to our ball club that season as anybody. He had led the league with six shutouts in ’67. We weren’t going anywhere without him.”

On Saturday, September 14, 1968, McLain was scheduled to go for his 30th victory of the season against the Oakland Athletics. Lolich marked the occasion by posting a sign on a pillar in the clubhouse reading, “Attention Sportswriters, Denny McLain’s Locker This Way.”

Sandy Koufax was in town with the NBC television crew, and Dizzy Dean traveled from his home in Wiggins, Mississippi, to take in the festivities. In the midst of such hoopla, Lolich wondered if McLain’s long shadow had forever eclipsed his teammates.

As was their custom in ’68, the Tigers rallied late in the game, defeating Oakland in the bottom of the ninth inning. After being ushered into the Detroit clubhouse, his 30th victory in hand, McLain had to return to the field as the hometown fans refused to go home without a curtain call.

The ’68 season was the last time the top team from the American League and the top team from the National League went directly to the World Series. There weren’t any playoff rounds or wild-card teams—something players from the Tigers and the St. Louis Cardinals (the NL pennant winners that season) took increasing pride in as the years passed.

In the ’68 Fall Classic, McLain ran into a formidable opponent in Bob Gibson, the Cardinals’ staff ace. In Game 1, McLain was gone by the sixth inning and could only watch as Gibson shut out Detroit, 4–0, and struck out 17 to break Koufax’s record.

“That day Bob Gibson was the toughest pitcher I ever faced in any particular game,” the Tigers’ Willie Horton said.

When McLain lost again to Gibson in Game 4, the Tigers were on the verge of elimination—only still alive thanks to Lolich’s victory in Game 2, in which he had hit his first home run in the Majors.

After the Tigers took Game 5, 5–3, McLain went to Detroit Manager Mayo Smith and asked to pitch on short rest. Bothered by a sore shoulder throughout his remarkable season, McLain had received another cortisone shot. Some wondered if the Tigers’ ace was trying to save face and match up against somebody other than Gibson. Still, McLain’s shoulder did feel better and Smith decided to start him on two days’ rest over Earl Wilson, Joe Sparma, or Pat Dobson.

Jim Northrup’s grand slam highlighted a 10-run third inning, and with that kind of run support McLain went the distance to tie the World Series at three games apiece. With the Tigers on cruise control, Lolich lobbied Smith in the Detroit dugout. If his nemesis could start and win on short rest, Lolich was convinced he could do the same.

After the Tigers’ 13–1 victory, Smith announced what everyone expected: Lolich would start Game 7 against Gibson.

The Cardinals’ ace was as dominant as ever, retiring 20 of the first 21 Detroit batters he faced. While Lolich matched Gibson on the scoreboard, nobody was sure how the Tigers left-hander was doing it. That included Lolich.

During the sixth inning, Tigers catcher Bill Freehan asked Lolich if he was all right. “Can you get me a couple hamburgers between innings?” the pitcher replied. Instead of calling in an order, Freehan told Lolich to relax—throw free and easy. “Just try to throw strikes,” the catcher said, “and you’ll get good velocity from there.”

Lolich took the advice and continued to get out of jams as the scoreless duel continued into the seventh inning. That’s when the Tigers put two men on base with two out. Not wanting to walk anyone, Gibson threw a first-pitch fastball to Northrup, who laced a solid line drive to center field. Curt Flood, Gibson’s roommate and arguably the best center fielder in the game, misjudged the liner and the ball bounced against the wall for a triple. Freehan followed with a double, plating Northrup, and the Tigers had a 3–0 lead.

Lolich, the final hurler to take center stage in “The Year of the Pitcher,” made it stand up, and the Tigers returned to Motown as champions.

“I guess I’m an unlikely hero,” Lolich told the press. “Potbelly, big ears . . . just a steady guy who shows up every day and gets the job done.”

Then in a parting shot at his unlikely pitching partner and frequent rival Denny McLain, Lolich added with a smile, “There’s always somebody else making a big deal out of things, getting the ink, making the moves. But you know what? I knew all along I could do it.” 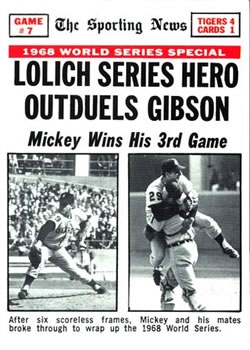 Courtesy of: The Trading Card Database