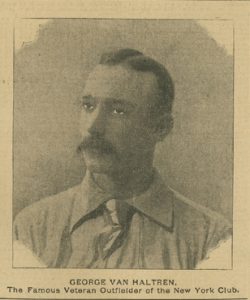 For the sake of argument, let’s say that Tim Raines never gets elected to the Hall of Fame. Jump forward a century or so to a handy baseball landmark, say the year 2130. Without the stamp of immortality conferred by induction into the Hall of Fame, Tim Raines is completely forgotten. Only scholars of the distant late-twentieth century even recognize the name. The savvy baseball fan recalls Rickey Henderson as the leadoff batter from that era worth remembering. Nobody knows or cares that for most of the second half of the twentieth century, Raines was a long-term star as a leadoff man, overshadowed only by the more prolific Henderson.

That is precisely the fate of George Van Haltren, whose heyday was 120 years ago. Pause a moment to ponder how little you know about him. A month ago, I knew he was a good hitter, a speedy outfielder, and a star on the pre-McGraw New York Giants, and that was about it. I chose him as a research subject because of my growing interest in players who excelled as both pitchers and hitters.

As always, I learned much more about the man and his accomplishments than I anticipated. Most of all, I learned that he was the Tim Raines of his time. He would be universally regarded as the greatest leadoff man of his era if not for “Sliding Billy” Hamilton, the prototype for “The Man of Steal” Henderson. Hamilton, who put up gaudier numbers than Van Haltren, made it to Cooperstown while Van Haltren took the long, lonely road to obscurity.

In many ways, Van Haltren’s career was emblematic of ballplayers of the late-nineteenth century, evolving along with the changing rules and volatile structure of the professional game. As a teenager, he stood out playing against older competition and made his name early on as a pitcher. His hitting developed faster, and he eventually became a consistent offensive force and one of the National League’s top defensive center fielders. Early in his Major League career, he played for six teams in six years, changing leagues three times. Despite being left-handed, he was called upon to play 59 games at shortstop one season. And all of this happened before he became a star with the Giants from 1894 to 1901. Let’s take a closer look at this remarkable career.

Born in St. Louis in 1866, Van Haltren moved to Oakland, California, two years later and lived there the rest of his life. In 1887, his second year as a pro, he was signed by the Chicago White Stockings, where Cap Anson gave the 5-foot, 11-inch, 170-pound southpaw 18 starts. Van Haltren pitched well with an 11–7 record, played 27 games in the outfield, and batted .203. He was just getting his feet wet, but he had made a strong impression on one front. As one newspaper reported, “Van Haltren is now an established favorite with Chicago audiences. Each time he stepped to the plate today he received a round of hearty applause. His modest behavior and gentlemanly deportment also make him popular among his fellow-players.”

Anson made much greater use of him in 1888, when the White Stockings finished second. Perhaps Anson heeded the wisdom of the New York Clipper, which reported that “When Chicago engaged him it was generally believed that the club had captured quite a prize as he can be utilized in a number of other positions besides pitching.” Van Haltren posted a 13–13 record in 30 games with a 3.52 ERA and four shutouts. He also contributed 14 triples and 21 stolen bases while playing another 57 games in the outfield, which persuaded Anson to make him a full-time left fielder in 1889. The 23-year-old blossomed as a hitter, batting .322 with a .414 on-base percentage, stole 28 bases, scored 126 runs, slugged a career-high nine home runs, and drove in 81 runs.

Labor turmoil turned Van Haltren into a baseball vagabond over the next few years. He signed on with John Montgomery Ward’s Players’ League in 1890 and did everything for Ward’s Brooklyn team. In his final spree as a starting pitcher, he went 15–10 in 28 games. After 1890, he pitched just 15 more games in the Majors. He finished his career with a 40–31 record, including a pair of victories over both Tim Keefe and Hoss Radbourn. In his spare time with Brooklyn, he played a lot of right field, raised his average to .335, and scored 84 runs in 92 games. But the Players’ League folded, and he moved on.

Popular Among our Readers: List of best Youth baseball bats

In 1891, he joined the swan song of the American Association (AA), playing for the Baltimore Orioles and leading the team in nearly every offensive department apart from home runs. He hit .318 with career highs of 75 stolen bases and 136 runs scored in 139 games. That impressed the folks in Baltimore so much that when the AA folded and the Orioles were absorbed into the expanded 12-team National League in 1892, Van Haltren was named player-manager.

The 1892 season turned into a major disappointment for the 26-year-old Van Haltren. When the Orioles got off to a dismal 1–10 start, he was replaced as manager. Soon after, the Orioles hired Ned Hanlon, who launched a Hall of Fame career with the team that dominated the rest of the decade. Van Haltren struggled, especially during his two months as a shortstop, when he committed 57 errors in 59 games. He was gone by September, deposed and disgruntled, traded to Pittsburgh for Joe Kelley, a future Hall of Fame outfielder who thrived in Baltimore.

Though Van Haltren scored 115 runs in 1892, his average fell below .300 (to .293) for the only time from 1889 to 1901. He rebounded the next season with the Pittsburgh Pirates, benefiting like all hitters from the rule change moving the pitching distance back to 60 feet, 6 inches. He raised his average 45 points and pulled off the amazing feat of scoring more than one run per game, with 129 tallies in 124 games. For one month beginning on June 30, he ran wild, scoring 43 runs in 26 games, thanks to 45 hits, 19 walks, and nine steals. “Speed,” he declared, “is the first requisite of a good player.” One of the fastest runners of his generation, he was timed at 10.3 seconds in the 100-yard dash, an asset both on the bases and in the outfield.

Van Haltren got a big break that winter when his contract was sold to the New York Giants. Reunited with Manager John Ward, he took over as their center fielder and leadoff hitter. He became their biggest star from 1894 to 1901, batting over .300 every season with a high of .351 in 1896. He scored over 100 runs every year, too, averaging 115. He averaged 38 steals and even topped 100 RBIs in 1894 and 1895. Still blessed with the arm strength of a pitcher, he averaged 27 assists a year, leading the league three times, and his career total of 349 assists is fourth all-time amongst outfielders. Bill James has judged him as having the best outfield throwing arm of the 1890s.

In October 1894, Van Haltren enjoyed his lone performance in the national spotlight as the second-place Giants challenged the first-place Orioles in the inaugural Temple Cup championship series. He contributed seven hits and a .500 average in the four-game sweep that brought the title to New York, but the Giants didn’t win another pennant for a decade. In a poll that winter, fans named him their favorite Giant, and he was presented with a silver-encased bat that now resides at the Hall of Fame.

Van Haltren had smooth sailing through 1901, batting .335 that season at age 35. But the party ended in May 1902, when he hesitated midway through a slide into second base and, like many other players who made that blunder over the years, wrecked his ankle. He missed the rest of the season, struggled in 1903, and was released by the Giants, ending his Major League career. He spent six more years playing minor league ball in California, managed the Oakland Oaks to three Pacific Coast League pennants, and took a brief but frustrating shot at umpiring.

He also spent five years as a scout for the Pirates, whose owner, Barney Dreyfuss, paid him an unusual compliment: “He never has secured a player for us, but has saved a lot of money by warning us not to sign players he knew could not make good in the National League. Van Haltren is an excellent judge of ballplayers.” Van Haltren was done in baseball by 1912. Working as a lather in construction, he led a comfortable life in Oakland, prospering from rental properties, until his death in 1945.

He had gotten scant support for the Hall of Fame in the early, overcrowded ballots, and by 1945 was consigned to consideration by the Veterans Committee. He certainly had the credentials: a .316 average, 2,544 hits, 1,642 runs (37th all-time), and 538 stolen bases (21st). In 1983, when the committee turned him down in favor of Walter Alston and George Kell (who had 2,054 hits and scored 880 runs), he was one of just 40 players with 2,500 hits and a .300-plus career average—and one of just three who were not enshrined in Cooperstown. Since then, one of them, Richie Ashburn, has been elected, while the third, fellow 1890s star Jimmy Ryan, is also largely forgotten.

Each year since 2009, SABR’s Nineteenth Century Research Committee has chosen a “most overlooked” player from baseball’s early days who deserves Hall of Fame election. One of the six, Deacon White, was elected in 2013. I’ve already written an article here about Harry Stovey, the 2011 nominee. In 2015, once again, Van Haltren was on the committee’s ballot, and once again support for his election fell short.

If and when Tim Raines gets elected, we can start calling Van Haltren “the nineteenth century Kenny Lofton” instead.