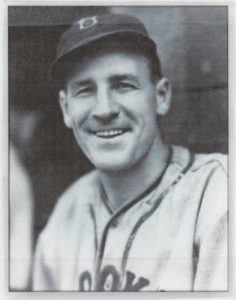 In 1931, Giants Manager John McGraw was so smitten by reports over a budding second baseman with the Louisville Colonels of the American Association that he left his team in Cincinnati and traveled 100 miles to scout him in person. It turned out to be a wash; McGraw declared the kid to be of insufficient build to withstand the rigors of National League baseball. “However,” he proclaimed upon his return, “my trip was not in vain. I saw a great outfielder with the Indianapolis club. His name is Len Koenecke. I bought him for a lot of money.”[1]

McGraw was wrong on two fronts. The player he spurned, Billy Herman, was signed by the Cubs and went on to a Hall of Fame career. The great outfielder McGraw snatched up instead would have a far briefer story—but one supporting far greater drama.

The “lot of money” McGraw relinquished for Leonard George Koenecke involved $75,000 worth of player contracts, and on Opening Day 1932, he installed the strapping lad out of Adams, Wisconsin, as New York’s starting left fielder. Koenecke hit capably over the season’s first two months, but was rocked on June 3 by the unexpected news that McGraw, hampered by health problems, was resigning after 31 years on the job. The skipper’s replacement, Bill Terry, was less inclined to tolerate the poor fielding and untrained batting eye of his predecessor’s protégé, and 14 games after McGraw’s departure—during which an increasingly skittish Koenecke batted only .179—Terry optioned the 28-year-old to Double-A Jersey City. After the season, he sold Koenecke to Buffalo of the International League.

A .334 average for the Bisons in 1933 enticed Brooklyn to give him another opportunity, and this time the outfielder did not fail. In 1934 Koenecke led the Dodgers in on-base percentage (.411) and OPS (.919), tied for the team lead in home runs (14), and finished second in batting average (.320) and doubles (31). Diligent work with manager Casey Stengel even turned his glovework around, Koenecke’s .994 fielding percentage (two errors in 318 chances) setting a standard for National League outfielders. The New York Times labeled him “the new Flatbush hero.”[2]

Koenecke showed up for spring training in 1935 overweight, and when the season began, his performance sagged across the board. As the Dodgers slogged through the late summer months, he was banished to the bench with increasing frequency.

By September 16 the Dodgers were 27 games out of first place, and Stengel decided to see what his future might hold by testing out some younger players through the end of the season. Having just arrived in St. Louis for a five-game series, the manager cleared roster space by paying Koenecke, along with pitchers Les Munns and Bob Barr, for the remainder of the schedule, and sent them home early.

Although Koenecke was not outwardly antagonized upon receiving the news, the reality of the situation—Brooklyn’s plans for the following season clearly did not involve the former Flatbush hero—likely settled upon him as he prepared to travel. It would be the second time Koenecke had washed out of the big leagues in the span of three years. His final opportunity had likely just passed him by.

The trio of exiles was booked onto an American Airlines flight from St. Louis to New York, with connections in Chicago and Detroit. Upon boarding, Koenecke began drinking in earnest, and by the time the plane was someplace over Lake Michigan he was out of his seat and arguing vociferously with one of the seven other passengers aboard. A stewardess attempted to calm him, and he angrily knocked her to the floor.

With that, both pilots raced into the cabin to restore order, one of them—6-foot, 200-pound James Hammer—spending the latter part of the flight standing watch over Koenecke until the plane landed in Detroit. When it did, the ballplayer was escorted off, and told to find his own way home.

Koenecke eventually contacted a pilot, William Joseph Mulqueeney, willing to fly him to New York, in a small plane that was once owned by Broadway torch singer Libby Holman and her husband, tobacco heir Z. Smith Reynolds.[3] Joining Mulqueeney was his friend Irwin Davis, a professional skydiver.

The aircraft took off at about 10 p.m., with Koenecke sitting up front alongside the pilot. Soon, however, the ballplayer began to repeatedly nudge Mulqueeney with his shoulder, despite repeated requests to stop. When the ballplayer responded by lunging for the controls, Mulqueeney ordered him to the rear. Koenecke grudgingly changed spots with Irwin, but even then, sitting directly behind Mulqueeney, he proceeded to yank at the pilot’s neck. Davis slid into the seat alongside to try to settle him down.

The antagonism escalated. Soon, Koenecke and Davis were shouting at each other. Then they were throwing blows. The men wrestled each other to the floor, at which point Koenecke bit Davis repeatedly on the shoulder. Mulqueeney tried with increasing desperation to control the tiny plane as the men grappled for a full 15 minutes, dangerously rocking the aircraft as they rolled from one side to the other. Davis, unable to handle his larger opponent, cried out for help.

“I had to come to a decision,” Mulqueeney later told police. “It was either a case of the three of us crashing, or doing something to Koenecke.”[4]

The pilot picked up a nearby fire extinguisher and, with one hand still on the controls, bashed Koenecke over the head. It served mainly to antagonize the ballplayer, who advanced toward Mulqueeny. So Mulqueeney hit him again. And again and again.

By the time Koenecke was subdued, the pilot had no idea where the aircraft was. Eventually he spotted the lights of Toronto and, coming upon a racetrack, set the plane down.

Upon receiving the news of their teammate’s untimely passing, the Dodgers donned black armbands for the following day’s game against St. Louis. Koenecke’s wife, Gladys, took their three-year-old daughter from their summer apartment in Brooklyn to their home in Wisconsin. Koenecke’s father and brother set out to Toronto to retrieve his body.

Mulqueeney and Davis were arraigned on manslaughter charges, but it took the jury only minutes to return a verdict of self-defense; the men were released and the case was closed. “My God,” said Mulqueeney during the trial, “I wish I could take those blows back.”[5]

On Opening Day of the 1936 season, Freddie Lindstrom—age 30 and recently released by the Cubs—started in Koenecke’s spot in left field for the Dodgers. Stengel’s anticipated youth movement never came to fruition, as Brooklyn’s average age actually increased by nearly a year over the previous season. After a seventh-place finish, the manager was fired.

Len Koenecke’s name would periodically appear in newspaper agate over coming years, almost always in reference to his fielding record. Lost to history, more or less, was what he did in his final moments, and how things could hardly have ended worse.