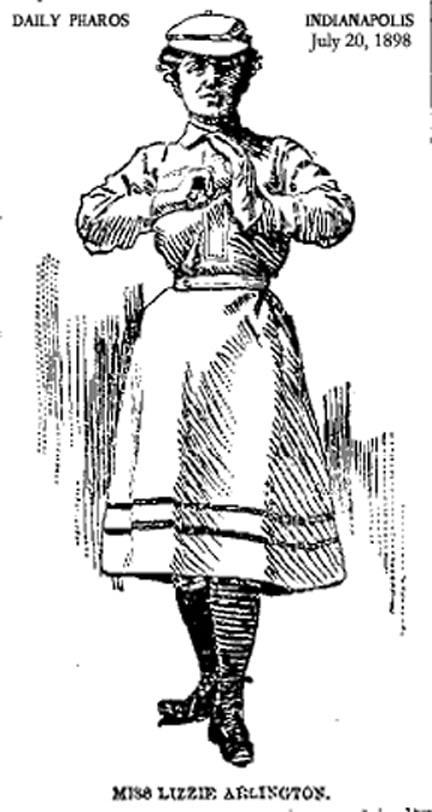 Most people think the women of the All American Girls Professional Baseball League of the 1940s was the first and only opportunity for women to play professional baseball. Not true.

Women who loved baseball began turning professional almost as early as men. The club generally recognized as the first men’s all-professional team, the Cincinnati Red Stockings of 1869, came only a few years ahead of the women’s pro teams that organized themselves and traveled to various cities playing against each other or local teams of men or women.

Some women’s baseball clubs of the 1870s through the 1890s hired promoters to seek games with opponents and schedule them locally and in other cities. Sometimes two clubs would travel together and play each other.

At an 1879 game in Boston, a crowd of 1,600 watched a women’s team from New York play another women’s team from Philadelphia. Reporters thought they played poorly, and their appearance in public wearing short dresses shocked many in the crowd. Nevertheless, they played again a month later in Cincinnati.

A few women became stars in men’s professional ball. Lizzie Arlington began pitching in 1898 for the  men’s minor league team in Reading, Pennsylvania. By the following year she had become a sensation. More than a thousand fans came to watch her pitch against Allentown in black stockings and a knee-length skirt. The club owner exploited her presence, sending her onto the field in a carriage drawn by two white horses. In the ninth inning with her team leading 5-0, the manager sent her into the game.  She filled the bases with two out, then retired the side. The crowd shouted its approval, and a reporter grudgingly wrote, “She is a success,” but of course he added the common caveat, “for a woman.”

The big expansion of women’s pro teams came at the turn of the century with the Bloomer Girls. They were not just a temporary fad; some of these teams lasted into the 1930s.

After being released from her minor league team, Arlington joined one of them. The Bloomer Girls teams adopted the loose pants gathered below the knee that had been invented by Amelia Bloomer out of modesty and convenience because pants revealed less during sliding and made running much easier. From wearing bloomers, it was a short step to the knickers of a standard baseball uniform.

The Bloomer Girls teams were well organized and traveled widely. Some took spring training trips, and players were often required to follow club rules much like those imposed on the male professionals. Many of these clubs hired a couple of men in order to help with pitching, and some men who later became famous in the major leagues, such as Rogers Hornsby and Smoky Joe Wood, got their start in baseball by playing on Bloomer Girls teams.

If you judge by today’s social structure, you will assume that men and women on these teams failed to respect each other and probably fought constantly. Today a professional player, faced with the possibility of women in pro baseball, is likely to say, as one did not long ago, “If a woman was hired for my club, I would quit.” But what happened in the past was different.

Take the case of  Alta Weiss, an Ohio pitcher of the early 1900s with a fastball, curve ball, knuckleball, and spitball. She often beat the male semipro clubs of northern Ohio. A reporter for a Cleveland paper called her “phenomenal,” and “a marvel.” She showed her stuff in 1907 at the Cleveland pro baseball park by beating another star semipro team in front of 3,000 enthusiastic fans.

Of course, Alta can be considered a special case. Her father, a physician, purchased a male semipro club for her to pitch with, and when the team traveled, a member of the Weiss family always chaperoned her. Probably the men on that semipro team got along with her because they felt they had to, and doubtless she felt protected from any harassment.

A better example might be Lizzie Murphy, a Rhode Islander with a background in textile ball who was hired by men’s teams to play infield. She eventually hooked on with an excellent men’s professional team, Carr’s All-Stars, that traveled all over New England and Eastern Canada every summer to play.

Lizzie became the drawing card of this team, the star who drew in the fans. Owner Ed Carr advertised her widely, saying that she was a “real player,” meaning she was not just a spectacle like Lizzie Arlington.

“She produces the goods,” he said of Murphy, who lasted with his team for 17 years.

How did she manage, especially on road trips? She had no trouble, she claimed, because she acted like one of the guys, so that’s how they treated her. She said they used plenty of swear words, but she had heard them all and ignored them. Her philosophy was that “playing ball is the same as everything else in life. Mind your own business and concentrate on what you are doing.”

Once Lizzie was given the opportunity to play with and against some Red Sox players in an exhibition game at Fenway Park. How did that work? As Lizzie explained, “Once they saw I could play baseball, they accepted me.”

Lizzie’s appearance supports her theory that acting like “one of the guys” and “minding your own business” makes the other players forget the difference in gender. Her photo shows her as small and slim, wearing the standard baseball uniform. More important, she appears modest and unassuming — the opposite of Lizzie Arlington, who acted as though she enjoyed being a spectacle, especially in raising her cap to the crowd to accept its cheers.

That doesn’t mean Murphy avoided the limelight completely. The owner allowed her to make extra money by going through the stands selling her photograph. And on the field, she was one of those players who “talks up” the game, encouraging the others to play their best. Lizzie is an example of a woman ballplayer who fit in because she worked at fitting in.

Some of today’s women players have the same kind of determination but throughout their careers found themselves constantly fighting for their rights. Justine Siegal, who now runs a women’s baseball league, was frequently faced with opposition from coaches and male players who rejected her or refused to let her try out because of her gender. As a result, Siegal says, she grew up with a chip on her shoulder.

The attitude of all the men who tried to block Justine differs markedly from those on Carr’s All Stars, Why? Perhaps it’s because the men on Carr’s club believed it was a privilege to play on the team, and they had to behave well in order to stay on it. They probably felt that if Carr wanted to hire a woman, they had to accept it, especially if that woman contributed greatly to the team’s success and didn’t demand any special attention.

Today’s male players and coaches display a different kind of attitude. They appear to believe themselves entitled to rights not transferable to a woman. They are entrenched in baseball and view it as one that is masculine only. They feel their “manliness” is threatened by a woman’s presence. If that analysis is correct, then their attitude probably comes from the long tradition in this country that only men play baseball.

That view is understandable, if flawed. Boys have long been catered to when it comes to baseball. It took girls 35 years to gain access to Little League because its founders believed that only boys played baseball and that girls need not be considered. Boys and young men can always find a team or a league to play with, while females usually have to start their own.

There may come a time when people of both genders can again play on the same professional baseball clubs. But nobody sees that time coming soon.