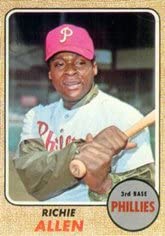 1968 Richie Allen
All images courtesy of The Topps Company

The Major League Baseball Players Association (MLBPA) was formed in 1954 but was nothing more than a house union for the next dozen years. The way it operated was something like this: A couple of times a year, a few player representatives met with some owner representatives and made a few requests, like “the shower heads in Cincinnati aren’t putting out enough pressure.” The owners would come back in a few months having resolved some of the issues. The players had a pension, which mainly came from the TV rights to the All-Star Game, and little else.

In early 1966 the players hired Marvin Miller, a labor economist from United Steelworkers, to be their new executive director. In baseball, nothing else was ever the same again. Over the next several years, Miller and the players engaged in true collective bargaining, earning increased benefits, larger salaries, an impartial grievance procedure, and, ultimately, limited free agency.

In September 1966, the MLBPA created a group licensing program—allowing companies to make deals with the union to use players’ names and pictures to sell products. Of vital importance, the star players (who were often the only ones the company wanted to use) effectively signed over potential income to the union rather than trying to work out their own deals. Miller soon signed a contract with Coca-Cola to use player photos on the underside of bottle caps, netting $60,000 per year for two years. This deal helped keep the union afloat.

Inevitably, Miller turned his attention to Topps. As we have seen, Topps had individual deals with each player—minor leaguers received five dollars as a binder to lock them in for five years, then $125 if they appeared on a card or made a Major League roster for at least 31 days. Topps made sure they regularly renewed these deals to keep players perpetually signed. This all seemed inadequate to Miller, who set up a meeting with Topps, whose president, Joel Shorin, told him: “There will be no changes because, honestly, I don’t see the muscle in your position.”

A year later, having made no progress, Miller advised the players to utilize the only weapon they had—to withhold renewing their individual Topps contracts. The players went one better, in most cases refusing to pose for Topps photographers during spring training or throughout the 1968 season. In November 1968, Topps completely caved, agreeing to double their annual stipend (to $250 per year) and to pay a royalty of 8 percent on revenue up to $4 million in sales, 10 percent thereafter. In the first year of the deal the players collected $320,000 from Topps, about $500 per player. By the early 1980s, the players collected more than 10 times that from baseball cards.

One could say that this was the first time the fledgling union used their collective power to effect change, and its success was obvious. Jim Bouton later said that the episode convinced the union of Miller’s wisdom, and it allowed the union to be self-funding. That said, the player boycott also seriously impacted Topps baseball cards in 1968, and (especially) 1969. Topps still had their contracts but were now missing several month’s worth of photos. 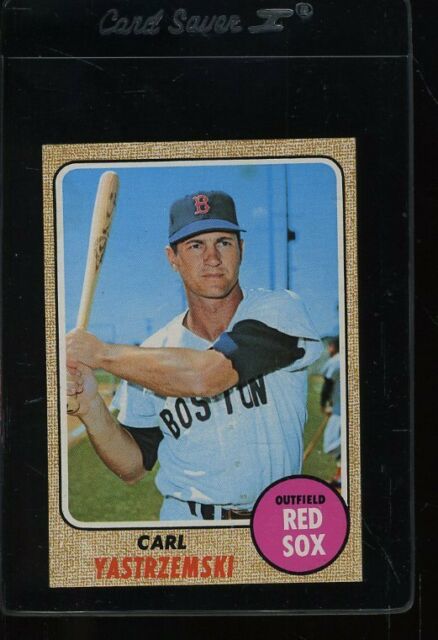 This was the first year I bought cards from the start of the year, but I lacked both focus and funds (I was seven years old), and my actual accumulation was relatively small. Ask an old collector about these cards today and you will find varied opinions. The speckled border might be either a fun nostalgic memory or an eyesore, but I have much affection for them. The backs of the cards were great—they were very similar to the 1967s, replacing green with yellow but employing the same vertical style that allowed for fewer columns of stats but more text.

Following the pattern of the time, most of the photos needed for the 1968 cards had already been taken by the time of the players’ boycott, although not all. Reggie Jackson, who came up in August 1967 and was one of the best prospects in baseball (he had been the No. 2 pick in the 1966 amateur draft), had no Topps card in 1968 though he was no longer even a rookie. In fact, he warranted a place on one of three “Athletics Rookie Stars” cards (a total of six players) that came out in 1967. I am speculating here, but my guess is that the Topps photographer showed up to take Reggie’s picture in March 1968 (for use in a late-series issue that season), and Reggie, or more likely the A’s team as a unit, went along with the boycott. In his first full season Jackson was one of the league’s best hitters, but the card-collecting youth of America had to make do without him. His first Topps card came out in 1969, nearly two years after his debut, and (as his rookie card) is fairly valuable today.

Several other players made debuts in 1968—like Bobby Cox and Bobby Bonds—that Topps did not get into the set. Sparky Lyle reached the Majors in July 1967, even before Jackson, and also did not get his first card until 1969.

There were other effects. Topps put out team cards for just 13 of the 20 teams, reduced their Rookie Stars cards, and put out just two multiplayer group cards. One of these, featuring Mickey Mantle and Harmon Killebrew, is one of the most popular cards in the set but was taken at the All-Star Game in 1964.

One of the unresolved (at least to me) mysteries of Topps baseball cards in the 1960s involves the Houston Astros. The Houston club officially changed its name after the 1964 season from the Colt .45s to the Astros. Topps did not issue team cards for the Astros for six years, though the base player cards were unaffected through 1967.

In 1968 Topps stopped using the name “Astros,” instead using the team name of “Houston,” and did not show the Astros hats or uniforms—the cards used headshots with blacked out or missing hats. In 1969 they followed the same pattern until the fifth series, when the uniforms were suddenly shown again. In 1970, things were finally corrected, and the name “ASTROS” was back.

The unconfirmed story is that the Astros and Monsanto (the maker of AstroTurf) had a dispute over the use of the name, and Topps either chose or was compelled to stay out of it. The Astros had very attractive uniforms in those days, but they were largely unseen by the kids of 1968 and 1969.

All told, in 1968 Topps ended up with 105 hatless photos, and another 35 altered hats (largely because of the Astros problem and the move of the Athletics to Oakland). One can see why Topps was anxious to settle with the players union. 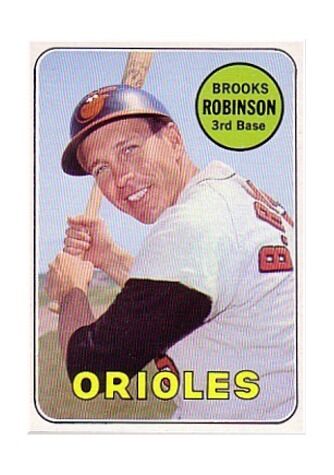 This was a big year for yours truly, as it was for Neil Armstrong and Richard Nixon. I played on an organized team for the first time, attended my first big league game, visited the Baseball Hall of Fame, began performing (private) baseball research projects, and bought baseball cards all summer. Although I have been a fairly steady baseball enthusiast nearly my whole life, 1969, at age eight, was likely my peak year as a fan. I have basically been coasting since then.

The 1969 Topps design remains a favorite. Unlike the previous year’s distracting border, Topps has the color photo stretch nearly to all four corners, with the simple design elements set on top. As I have said several times, this is my preferred model. The backs returned to horizontal, with a bright red border, easy-to-read stats, a fun cartoon, and text. If all of the cards were like Brooks Robinson’s, this set could make a case as the best Topps ever put out.

Unfortunately, the 1969 set has a lot of problems. First off, there were four new teams—the Expos, Padres, Pilots, and Royals—newly filled with players that Topps needed to show without a hat or with a blackened logo. Second, there was the continuing problem with the Astros, creating a fifth hampered team. Topps had to use 125 hatless photos and another 73 with a blackened hat, accounting together for 37 percent of the base player cards.

Finally, there were the lingering effects of the player boycott. Though the situation had been resolved in late 1968, Topps still had very few recent photos to use when they laid out the next year’s card set. One casualty was the team card subset, which Topps scrapped for the first time since 1955. (This did not bother me honestly.) 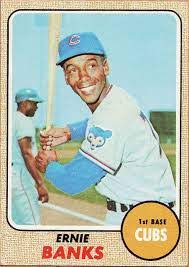 More importantly, literally dozens of cards, well more than 100 in all, used recycled photographs. The Joe Morgan, Henry Aaron, and Tom Seaver cards used the same photo as 1968. Carl Yastrzemski and Ernie Banks showed the same photo but cropped a bit closer. Willie Mays’s card was a recropping of his 1966 card. Johnny Bench’s card, the first one he had to himself, was taken several years before when he was in the minor leagues. 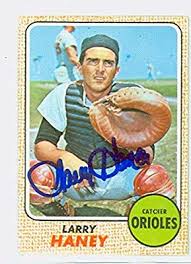 One of the more interesting cases involves Larry Haney, who is shown in an identical photo except with a reversed negative (confusing kids everywhere as a left-handed catcher) and a new team.

To Topps’ credit, they hustled to spring training to take a lot of new photos and got many of them in the set beginning with the fifth series. For those of us who hung in there deep into the summer, we were rewarded with beautiful new cards showing the uniforms of the four expansion teams, the Astros (finally!), and the Oakland Athletics. Opening these cards in late summer, as I readied for fourth grade, was a supreme joy. 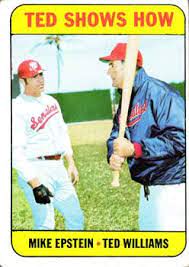 There was an interesting artifact of this set involving Ted Williams. In late January 1969 the Washington Senators hired Williams to replace Jim Lemon as their manager. This was a bit late for Topps, who put Lemon on a card in the third series. But seeing how this was Ted Williams, whom Topps had not used since 1958, they gave Williams both a multiplayer card and his own base card in late summer, meaning that the Senators had two manager cards that year. Sadly, Topps would retire multiplayer cards after this season.

Thank you to The Topps Company for granting us permission to use images of their cards in this series.

Next week: Along with their standard card set, Topps also produced many attractive insert sets and standalone sets throughout these years. I will show some of my favorites.