It has been 50 years since Eliot Asinof’s landmark book on the 1919 Black Sox scandal, Eight Men Out,was first published. Baseball fans have been captivated by his compelling narrative about the talented but disgruntled Chicago White Sox ballplayers, underpaid and ill-treated by owner Charles Comiskey, taking bribes from gamblers to fix that year’s World Series against the Cincinnati Reds. Eight Men Out has been called the definitive history of the scandal.

When Asinof wrote his book, published by Holt, Rinehart and Winston in 1963, he relied heavily on major newspaper accounts of the scandal and personal interviews with a few survivors. He spoke with White Sox center fielder Happy Felsch and former boxing champion Abe Attell, who helped organize the fix as an intermediary between the Chicago players and New York gambler Arnold Rothstein, known as “The Big Bankroll.”

Reconstructing the story in dramatic fashion, Asinof highlighted the bitter predicament of low-salaried ballplayers under the hated reserve clause that bound a player to his club for life. He paid particular attention to the atrocities committed by Comiskey against his players, suggesting they were motivated to throw the World Series in part because of his reneged promises and miserliness. Asinof also noted the harshness of baseball’s first commissioner, Judge Kenesaw Mountain Landis, in banning the eight accused players permanently from organized ball even after a jury acquitted them in a celebrated but farcical criminal trial.

Eight Men Out is one of the most influential baseball books ever written. But thanks to information that has come to light in the last 50 years, we now know it is far from definitive. As the late author Gene Carney liked to say, the Black Sox scandal is a cold case, not a closed case. So what new information did Asinof not have available to him in 1963 when he first unraveled the story of what has been called “baseball’s darkest hour”? Let’s take a look.

One of the enduring myths of the affair is that the Chicago players were grossly underpaid relative to their peers; Asinof wrote that “many players of less status got almost twice as much on other teams. . . . [Comiskey’s] ballplayers were the best and were paid as poorly as the worst.” This claim is the linchpin of Asinof’s story: The low salaries are widely considered to be the driving force behind the players’ decision to fix the Series. However, that theory does not hold up to modern scrutiny.

Deep in the archives of the National Baseball Hall of Fame Library in Cooperstown, New York are thousands of organizational contract cards that, as researcher Bob Hoie writes, “contain salary, bonus payments and any modifications to the standard contract covering each season [of a player’s career].” These index cards were provided to the Hall of Fame by Major League Baseball in 2002.

Hoie and fellow researcher Mike Haupert have analyzed the contract cards and found that the White Sox actually had one of the highest team payrolls in the Major Leagues; at $93,000, it was nearly $20,000 more than that of the National League Champion Reds.

Furthermore, White Sox ace Eddie Cicotte’s total compensation of $8,000 made him the second-highest-paid pitcher in baseball behind Washington’s Walter Johnson, a far cry from Asinof’s claim that Cicotte’s Reds counterpart, Dutch Ruether, was “getting almost double that figure.” Ruether, whose sterling 1.82 ERA in 1919 matched Cicotte’s figure, was actually making $2,340. Talk about underpaid!

Speaking of Cicotte, a memorable scene in Eight Men Out has the star pitcher confronting owner Comiskey over his failure to pay out a promised $10,000 bonus for winning 30 games. (In Asinof’s book, this standoff occurs in 1917; the John Sayles movie moves it to 1919.) Cicotte, who won a league-best 28 games in 1917 and 29 in 1919, claims Comiskey had him benched for two weeks down the stretch, allegedly to rest his arm for the World Series but in effect denying him a chance to win 30 games and earn the bonus. But recent research by baseball writer Rob Neyer and Major League box scores of the time (newly available at Retrosheet) thoroughly debunk this story.

Not only did Cicotte make all his starts in 1917, he also made several relief appearances in the season’s final weeks. In 1919, he had a chance to win game number 30 in late September against the St. Louis Browns but was pulled from the game after giving up the lead in the seventh inning. The White Sox rallied to beat the Browns and clinch the American League pennant, but Cicotte remained stuck at 29.

The contract cards aren’t the only new source of information that has enthralled Black Sox enthusiasts in recent years. In 2007, the Chicago History Museum made available for the first time transcripts from the grand jury proceedings and criminal trial that originated from the offices of Charles Comiskey’s attorneys. In Asinof’s preface to Eight Men Out, he wrote that the last known reference to those documents dated to 1924. “No one with whom I came in contact had ever seen the transcripts nor had they any idea where they might be found,” Asinof wrote.

Asinof used published newspaper reports of the grand jury and trial testimony to piece together his story for Eight Men Out. But these reports were often incomplete, contradictory, and just plain erroneous. For instance, it was reported that Chicago pitcher Lefty Williams gave a confession to club attorney Alfred Austrian and then simply repeated that statement to the grand jury. But his actual testimony to the grand jury, which went virtually unnoticed in press coverage, contained much more detail and nuance.

Another newly rediscovered Black Sox trial, Joe Jackson’s 1924 back-pay lawsuit against the White Sox (filed in Milwaukee because the White Sox franchise was incorporated in Wisconsin), has also greatly expanded our knowledge of the scandal. That trial was nearly forgotten for 75 years until Gene Carney expounded on it in his book Burying the Black Sox. Carney was able to examine Milwaukee trial testimony and depositions that revealed illuminating details about what Comiskey knew about the 1919 fix and when he knew it.

Carney also wrote about the private detectives hired by Comiskey to snoop on the eight accused players after the World Series ended; those detective reports are available to the public at the Chicago History Museum.

Similarly, the records and correspondence of American League president Ban Johnson can now be accessed at the Hall of Fame library. They reveal the extent to which Johnson pursued evidence to uncover the World Series fix, even going so far as to launch a two-week manhunt near the United States-Mexico border in Texas to track down Sleepy Bill Burns, the prosecution’s star witness in the trial. Johnson’s interest in revealing the fix was aided in large part by his obsessive desire to harm Comiskey, a former close friend and confidant turned bitter enemy.

Another new piece of information surfaced among long-lost back issues of the gambling publication Collyer’s Eye, a Chicago-based newspaper that was the first to publicly report rumors of the World Series fix. The paper, led by enterprising reporters Bert Collyer and Frank Klein, also was the first to name the accused players in print, doing so just days after the World Series ended. No mention of Collyer’s Eye is to be found in Asinof’s book or in most other histories of the Black Sox scandal before Carney.

Perhaps the most fascinating resource to come to light since Eight Men Out was published is the diary of longtime White Sox secretary Harry Grabiner (his role was similar to the general manager’s today). Grabiner’s diary, which included pages of handwritten notes about contract negotiations with players and the White Sox’s investigation into the World Series fix, was discovered in the mid-1960s by club owner Bill Veeck in the bowels of Comiskey Park. Veeck published portions of the diary in his entertaining book, The Hustler’s Handbook. The whereabouts of the full diary remain unknown today. 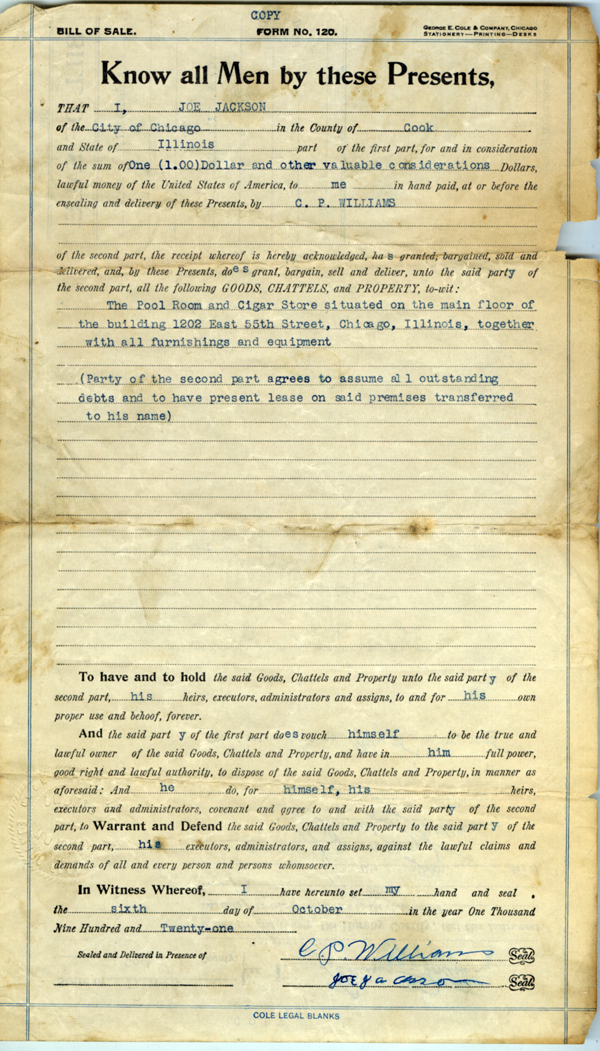 None of this information was available to Eliot Asinof when he wrote Eight Men Out. His story of the Black Sox scandal is as compelling as ever, but it can no longer be considered definitive. We are learning more about the 1919 World Series fix and its principal characters every day, thanks to the Internet and to all of the new sources that have surfaced in the last 50 years. Indeed, the Black Sox case is very much open.