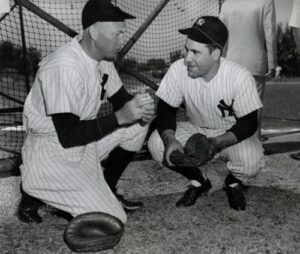 This is the story of two Yankee catchers and how the legacy of one soared while the other remained in place. In other words, it is the story of how one player can get better after retirement, and the other not, even though neither has had another hit nor thrown out another runner in all these years. We are talking about Bill Dickey and Yogi Berra, both of whom had their uniform No. 8 retired, the only time two players had one number retired.

In 1969, for the centennial of professional baseball, Dickey was chosen as the greatest living catcher in a national poll conducted by the Office of the Commissioner. Each team also did their own “all-time teams,” allowing fans to vote, and it is significant to note that only six years after Berra played his final Yankee game, with the memory of his impressive career intact, the fans voted for Dickey, putting Berra on the “second team.”

In 1972, with Yogi off managing the Mets, and now elected to the Hall of Fame, the Yankees chose to honor him by retiring his number. Yankee officials recognized that Dickey had also worn No. 8, and you couldn’t do one without the other. They were, at that point, considered equals.

Today, a vote would almost certainly proclaim Berra first and Dickey second among Yankee catchers. Berra might, in fact, now be in the argument for best catcher ever. His popularity and name recognition has never been higher.

First, Yogi has lived a long life and remained in the public eye. He has done television commercials in eight decades — from the late 1940s until this one. Gillette Blue Blades to Aflac, with a lot in between.

His lovable side — the quotes attributed to him, some of which are in Bartlett’s Familiar Quotations — have made him popular beyond sports. Public officials are frequently heard to exclaim, “As Yogi Berra would say, ‘It ain’t over ’til it’s over.’”

The “Yogi Bear” cartoon made children aware of his name, even if it had nothing to do with him.

Then there was his stance against returning to Yankee Stadium after he was fired as manager just 16 games into the 1985 season. He was largely viewed with great admiration — the unjust sacking by the powerful owner, George M. Steinbrenner. “Who belongs there more, Yogi or George,” ranted angry fans as Yogi was elevated to martyrdom. Yogi was the victim, and his refusal to give in earned him widespread plaudits. It finally took an apology from Mr. Steinbrenner — a triumph for the little guy — to get him to return. To this day, the cheers for him are bigger than for anyone at Yankee Stadium. He has been considered the “greatest living Yankee” since Joe DiMaggio died in 1999.

Then there was the creation of the Yogi Berra Museum and Learning Center (not started by him), a half-hour drive from Yankee Stadium, where his life of high principles, good citizenship, and overall decency were acknowledged. A lot of people were unaware of his fine character until it opened in 1998 — they thought he was just a punch line. This elevated him to a higher plane, as people learned about a basic goodness that contributed to an almost-legendary 65-year marriage to the beautiful Carmen. Who more than Yogi Berra had in fact lived “The American Dream?”

Finally, there was a greater appreciation for his World Series accomplishments. More and more players, now earning millions, talked about winning “a ring.” The ring became the highest achievement, a way to distract, perhaps, from simply being happy to earn big money.

Nobody had more rings than Yogi, who played in 14 World Series, managed in two others, and coached in five others — earning 13 rings total. (After his reconciliation with the Yankees, he became a special advisor and has received seven more.) If the rings were the measurement of success, nobody came close, not in any sport.

But still, he is a lifetime .285 hitter compared to Dickey’s .313, and Dickey played in eight World Series, winning seven, and getting seven more rings as a coach. Not bad. While not the “captain” of the Yankees (the position had been “retired” upon the death of Lou Gehrig), he along with DiMaggio were clearly the leaders of Joe McCarthy’s great Yankee teams, setting an example of “how a Yankee conducts himself.”

As a coach, he was instrumental in making both Yogi and Elston Howard better catchers. Dickey had his own brief martyrdom, in fact, when he resigned as manager in 1946 after refusing to get a commitment for 1947 from owner Larry MacPhail.

There is no diminishing of Dickey’s Hall of Fame career or of his greatness. There is only the passage of time.

“I think one thing that separates them at this point is home runs,” says Ray Robinson, the Lou Gehrig biographer who has attended Yankee games since the 1930s. “Dickey’s 202 home runs in 17 seasons, especially as a left-hand hitter in Yankee Stadium in the lively ball era, gives Yogi an edge. But they are close.”

Dickey’s lifetime home run total is still tenth among catchers. Mike Piazza heads the list with 396; Yogi is fifth with 305 of his 358 at that position. But Dickey did not give the impression of being a slugger despite a 6-foot-1, 185-pound frame. (Washington catcher Carl Reynolds, the victim of a punch to the jaw from Dickey, might disagree about not being a slugger.) Dickey still holds the record for 13 consecutive seasons catching over 100 games, and his character has never been in question. In fact, a fine example of his character came in 1944 when a newspaper ran a poll to choose a favorite all-time player. Each vote cost $25 — with the recipient receiving a war bond in return. Lou Gehrig won the poll with 320 last-minute votes — $8,000 worth — all pledged by Dickey so his old teammate would win.

While Yogi would be the only Major Leaguer at Normandy for D-Day (albeit a future Major Leaguer), Dickey went off to war at age 37, missing two seasons after hitting .351 at age 36 in 1943.

There must be a Yogi-ism that covers that.