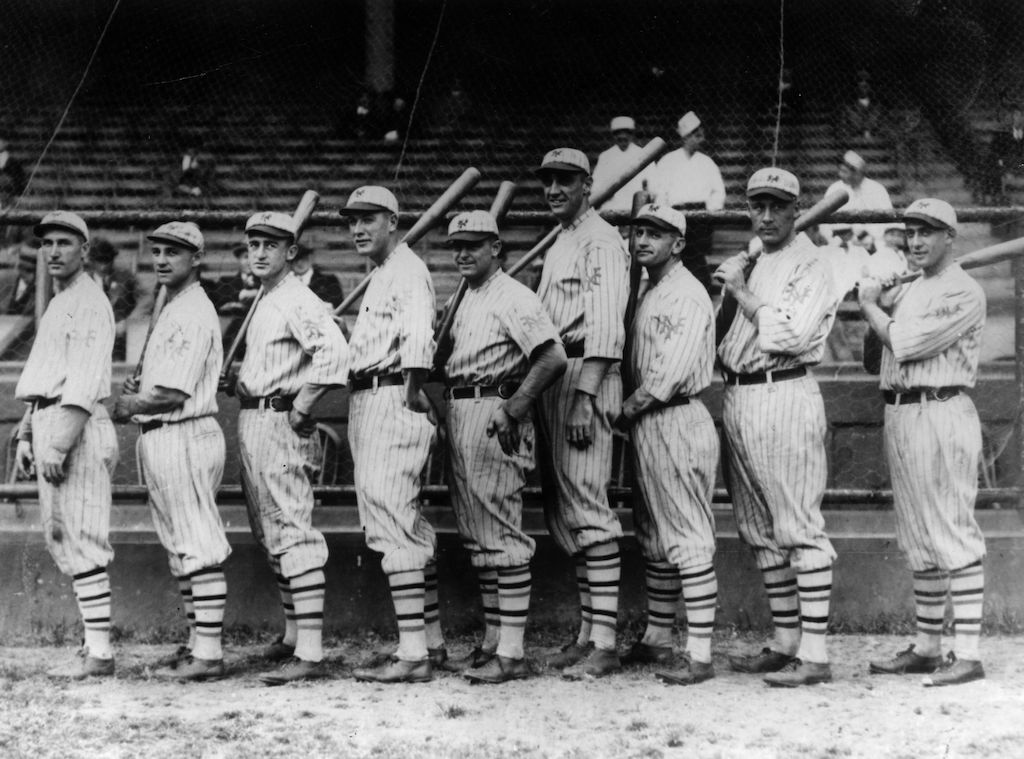 You can blame it on the uniforms.

Having discarded their old pinstriped garb with the interlocking “NY” on the sleeve, the 1916 New York Giants introduced new check-patterned regalia, complete with red sanitary stockings and a large “NY” on the chest—“The last word in baseball sartorial invention,” according to team secretary John B. Foster.

The Giants may have looked better, but after a 6–2 loss to the Boston Braves at the Polo Grounds on Monday, May 8, their record stood at 2–13. They had lost eight straight at one point. They were buried in last place, 8.5 games behind the National League–leading Brooklyn Robins.

But at Forbes Field the next day, after trailing 4–2 through five innings, the Giants scored six in the sixth, and four more in the seventh, to run away with a 13–5 victory. Thirty-five-year-old Christy Mathewson, in only his second appearance of the season, pitched the final 3⅔ innings, giving up only a solo home run to pinch-hitter Walter Schmidt.

It was the beginning of 17 consecutive wins for Manager John McGraw’s men (amazingly, all of them were on the road). Included in the streak was a May 20 game in St. Louis, in which Mathewson gave up only six hits, going the distance for his first win of 1916, and the 369th of his career. He also was the victor in the 17th game, a masterful four-hit shutout at Braves Field on May 29. By the time the streak ended, the Giants had leapfrogged all the way to second place, a mere game and a half behind the Robins.

But for the next three months, New York played uninspired baseball, going 40–49 (along with two ties) following the 17-game win streak. They had slipped all the way to fourth in the standings, 13.5 games off the pace, behind first-place Philadelphia.

The New York Giants of 1916 could wield the bat as well as anyone. They led the National League in runs scored and featured hitters like Dave Robertson, who topped the circuit with 12 home runs, to go with his .307 batting average. His fellow outfielders Benny Kauff and George Burns were prolific base stealers, while the infield of Bill McKechnie at third, Art Fletcher at short, Larry Doyle at second, and Fred Merkle at first was a solid bunch of proven veterans. Bill Rariden was one of the best defensive receivers in the game.

On the mound, New York featured 16-game-winner Rube Benton, and Pol Perritt, who won 18. But Jeff Tesreau, despite his 18–14 record, was not the same pitcher who had won 26 just two years ago, and the club lacked a reliable fourth starter. Luckily there was young Ferdie Schupp, who fashioned a nifty 0.90 ERA in 140 innings as a starter and reliever. A return to form by Mathewson would have solved a lot of problems, but the future Hall of Famer was on the downside of his career, coming off a season in 1915 in which he’d won only eight games.

At the Polo Grounds on Thursday, September 7, McGraw’s men pulled out a 4–1 win over Brooklyn. Schupp pitched a four-hitter to gain his fourth victory.

From then until September 30, the New York Giants did not lose a game.

They tied once, but they did not lose.

At 26 games, all at the Polo Grounds, it remains the longest winning streak ever in baseball, albeit with one tie. Ties, of course, are not counted toward official statistics in baseball. The longest winning streak without a tie belongs to the 1935 Chicago Cubs, who won 21 in a row in September to take the National League flag. Before the dawn of the modern era, Cap Anson’s Chicago White Stockings of 1880 also won 21 in a row, as they steamrolled to a 67–17 record and a National League pennant.

The Giants’ streak began innocently enough with Schupp’s victory over Brooklyn. Two days later, on September 9, Perritt pitched complete games in both ends of a Sunday doubleheader, giving up only one earned run, to make it four in a row.

By the time the Giants’ streak began, Mathewson was no longer a part of the team, having been traded to the Cincinnati Reds on July 20, along with McKechnie and the promising Edd Roush, for Buck Herzog and Red Killefer. Matty became the Reds’ new manager. He wasn’t expected to take the mound much (he ended up pitching only once). After 372 lifetime victories for the Giants, Big Six was gone, just on the eve of the team’s wild, wild ride. He returned to the Polo Grounds, looking out of place in a Reds uniform, for a series starting September 12. The Giants swept Matty’s new team.

“I’ll tell you something,” Matty said, when asked about the trade, “it’s been a mighty long time for me. The Giants have been my home. Leaving them like this, I feel the same as when I leave home in the spring of the year.”

New York won the first game of a doubleheader at Pittsburgh on Monday, September 18, to run the streak to 12 games. The second game, however, was called by rain after only eight complete innings, with the score deadlocked at one. It is the only blip on an otherwise incredible streak of winning baseball.

The Giants clobbered the Pirates the next day, 9–2, to make it 13 straight. They swept the six-game series with Pittsburgh, holding Honus Wagner to only one hit in 17 at-bats.

On September 20, Ferdie Schupp’s run of 27 consecutive scoreless innings was broken. It didn’t matter, as the Giants hung on in a 4–2 nail-biter to make it 15 straight, with Schupp going the distance.

The closest call came on Wednesday, September 27. Down 2–0 in the bottom of the ninth against St. Louis, the Giants were one strike away from defeat. But with two on and two out, Cardinal pitcher Bob Steele grooved a pitch to Buck Herzog, who tripled to tie the contest. New York won it in the bottom of the 10th, for 23 in a row.

On Thursday, September 28, the Giants took a twin bill against Boston, by the scores of 2–0 and 6–0. In the nightcap, Schupp tossed a one-hitter, and Benny Kauff hit a grand-slam inside-the-park home run. Twenty-five in a row.

On the following day, the game was called in the bottom of the fourth inning because of rain, with New York ahead 1–0. But the Giants made it 26 consecutive wins the next day, on the strength of another one-hitter, this time by Rube Benton, in the first game of a doubleheader against Boston.

The streak finally ended in the second game. Tied at two, the Braves scored five times in the top of the seventh to put the game away. Jeff Tesreau came on in relief and got rocked for four runs without retiring a batter. It was the Giants’ final home game of the year.

Their season essentially was over. There were still four games left to play, all at Ebbets Field, but New York was five games behind the first-place Robins. They finished the 1916 season in fourth place with a record of 86–66, seven games behind Brooklyn.

It had been an incredible streak, featuring eight doubleheader sweeps and 10 shutouts. But the New York Giants never spent a day in first place all summer long. How does a team with winning streaks of 17 and 26 games not even finish close, much less win a pennant? Do the math. Take away the 26-game streak, and the Giants were 60–66. Take away the 17-game streak on top of that, and New York went 43–66, a truly awful pace.

Still, there was no lack of praise for the streak from McGraw’s fellow managers. Wilbert Robinson, his old crony from their playing days on the Baltimore Orioles, and current skipper of the Robins, pointed out: “It demonstrates that McGraw has molded together a team of wonderful efficiency, and the credit for the successive victories undoubtedly hangs on him. We all have to take our hats off to McGraw.”

Joe Tinker of the Chicago Cubs didn’t mince words about the Giants: “The best team by far in the National League. The record is a remarkable one.”

According to Mathewson, “It was the most remarkable feat in years. McGraw has a great team, and I am tickled to death to hear that he has broken the record.”

As for McGraw, the 1916 Giants had the goods, despite the final record. “I think the club . . . is in many respects the greatest baseball team I have managed in my 14 years. Naturally, I am very much pleased in establishing a new record, but the boys deserve all the glory they will get out of it.”