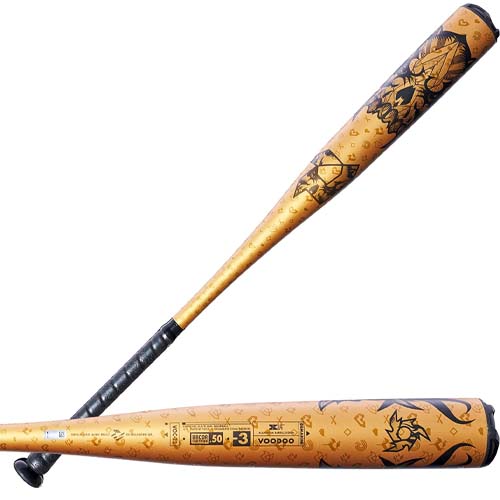 Nobody can deny that Voodoo One is a beast and performs like a beast.

But, You can also not deny the fact that it is no longer as durable as it used to be.

If durability is not your concern, you may buy it now.

Otherwise, there is no point in investing in this one. Instead, check out its competitors at the end of this article.

DeMarini released its new Voodoo one piece, hoping it would perform good at least in the USA lineup.

But this is the similar bat as previous year BBCOR Voodoo.

And guess what, it also has serious durability issues.

There are better options in USA line-up that you might want to go for.

The hottest and high-performing new BBCOR 2023 DeMarini Voodoo One has launched. And is ready to steal the show in the market.

This bat has made some headlines in the past about quality and durability issues. Nonetheless, this year they have tried to make it a better bat than in previous years.

But, it does not seem like the efforts of making it better has paid off this year.

Does it feel good in hand or vibrates when mishit?

Voodoo One is in the top bats for years now. Lightweight and feels remarkable for high swings.

There is no change in the weight from the previous year.

DeMarini Voodoo one has the power to take your swings to the next level.

Easy to control but a bit heavy as compared to Marucci CATX.

There are very little vibrations when mishit, you can say it is as you may expect from a youth bat.

How does it Perform?

There is no doubt that this bat is known as the whole powerhouse. The thin barrel can smash the ball out of the field.

High-quality design and is lightweight for hitters to take the game away from their rivals.

The power that this bat generates is amazing and this bat was on top of everyone’s list in the past.

Arguably, the best BBCOR bat that DeMarini ever made, but this Voodoo One has some serious competition from Marucci CATX in 2023.

The performance of 2023 Voodoo One USA bat is top notch and it can be compared to any of the one piece USA bat out there.

It has a very light swinging weight, very good balance and a stiffer feel. Just like any other one piece bat.

The all alloy construction makes it hot right out of the wrapper and does not need to be broken in before usage.

How is the Construction?

Voodoo One is a single-piece alloy with a thin barrel and a decent sweet spot for hitters.

There is no change in design, but gold is the new color scheme which looks very cool. There is a change that is a new end cap and knob for better durability.

Though, durability will be a big issue with this classic and they have tried to make it look and create better.

The bat design is alike to 2022 and there is not much to look for as the bat hasn’t changed much since its debut in 2017.

Besides, you will see light swings because of less weight and more barrels. Hitters will love this bat for sure and it’s been a top BBCOR bat for years now.

The barrel is made with X14 Aluminum alloy which is claimed to be precision engineered with the most consistent wall possible.

Features a tracer end cap that is made with lightweight composite material.

The grip is also very comfortable to the hands while swinging.

Is it Durable Enough?

Voodoo one is a fantastic BBCOR bat in the market, but durability is the main concern. New changes like an end cap and a new knob will make it better.

However, we are still not sure about how effective those changes are and what will DeMarini do to talk about this issue.

The new end cap was supposed to have a positive impact on the durability but it doe not seem like it really did. It still  breaks.

There are similar durability issues with the DeMarini Voodoo One USA as we found in the Voodoo one BBCOR.

The end-cap is very fragile and does not last long enough.

Is this bat Value for the money?

BBCOR: This bat is less expensive as compared to Marucci CAT X and it can definitely be worth your money only if you think you can take care of the bat and prevent from breaking/cracking.

Perfect for mishits and swings even if it is powerful enough to break all the swing records.

The new gold color scheme looks cool and the bat is lightweight and feels good in the hands.

USA: I think it would have been better if they tried something new in their USA Voodoo One. And prevented it from being as like 2022 Voodoo One BBCOR.

To all the hitters who want to hit the ball with power and want a lightweight bat.

Classic one-piece with new end cap and reinforce knob for better stability. Voodoo one is a top BBCOR and many players have loved this bat for years now and still, this bat has some spark left in it.

Moreover, if you love gold why not hit the ball with a golden bat?

There were no major changes made to the latest model than its prior mode. Except for the end-cap design.

And another obvious change is its new paint, there are no other changes made to the voodoo one.

The closest competitor is the Slugger Meta and just like every year, it has again managed to be the most loved BBCOR bat of the year.

It is adored by those who like to have a perfect balanced bat regardless of its price.

2023 Voodoo One Gold was expected to be a better version of its prior model, that had some serious durability issues.

But it does not seem like it is very much different, still those people are loving it whose bat knob has not been broken yet.

USA Voodoo One is something that we would not recommend because there are better options available right now.